"We changed the paradigm of what a diagnostic imaging (PACS) product should be by natively integrating 3D and advanced visualisation into a single platform. We believe this, combined with our proprietary streaming platform, has given us an 18 to 24 month technology lead. We are now looking at what is next, what a system would look like in say 3 to 5 years, and are starting to do the research and development to make that a reality and then be the first to commercialise it."
- Dr. H, co-founder and CEO of Australian Global Leader in SaaS Cloud Medical Diagnostics Imaging Visualization Software

Medical imaging data growth is exploding - and posing the high-value problem of viewing multi-gigabyte files which require lengthy download times. Viewing and interpreting the increasingly large and complex images with speed and accuracy is a matter of life and death. Today, 90% of all Electronic Health Record (EHR) is imaging data (by volume) and growing exponentially. The introduction of Digital Breast Tomosynthesis (DBT), a new form of 3D breast imaging, has added to the data explosion problem producing image files as large as 6 to 10 GBs per examination. Traditional PACS/digital imaging technology requires these files to be transferred across the network to the radiologist desktop to be visualized. This has created very significant network bottlenecks which have limited the widespread adoption and use of these new imaging technologies. Nearly all conventional diagnostics imaging software take an image and compress so it can be transmitted. 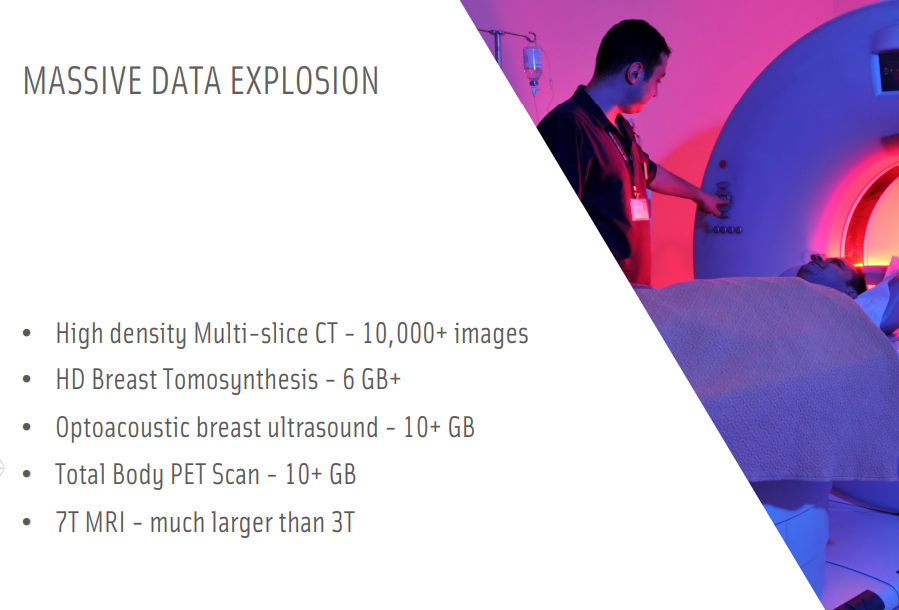 Consider the exponential competitive edge of an innovative software that can stream medical images real-time, on-demand, on-the-go from mobile devices, 3D, and in such a way that no quality is lost, enabling radiologists, clinicians and doctors to make diagnostic decisions remotely, and delivered via SaaS subscription just like Netflix.

This week, we highlight one of our portfolio companies, Australian Global Leader in SaaS Cloud Medical Diagnostics Imaging Visualization Software, which is up +12.5% during the week (19 to 23 Oct 2020), after  it had announced on 15 Oct that it had won a 7-year multi-million software subscription contract with one of the largest university hospitals in Germany & Europe, replacing the existing legacy PACS imaging systems. This rising dividend-yielding highly-profitable and cashflow generative innovator has also compounded +938% in capital gains in the recent 5 years vs MSCI ACWI World index +42%.

Unlike competitors' software, the images can be streamed from their archive thanks to the company's proprietary streaming platform, allowing multi-gigabyte files to display almost instantly, rather than requiring lengthy download times. This innovator's highly-modular and scalable technology delivers amazingly fast, multi-dimensional images streamed via an intelligent and unique server-side thin-client viewer, which enables the radiologist or clinician to instantly visualize these very large datasets without having to move the images to their desktop, thereby overcoming the bandwidth/network bottleneck issue. The software is differentiated by its scalability, powerful search capability and ability to allow clients to configure their business-specific workflow and rules to meet their needs.

There are many clinical cases with proven ROI in greater clinical accuracy and unparalleled increase in radiologist efficiency, from child with severe headache in CT scan showing aneurysms requiring emergency intervention, whereby there is no time to wait for tech or 3D lab post-processing, and MRA/VRA is performed on-the-fly with the company’s innovative software.

Co-founder and CEO Dr. H shared: “Radiology went from analogue to film-based to digital in the late '90s, early 2000s, and since then it's stayed in the same realm. You have a large network file, compress it and send it down via a wide area network (WAN) or a local area network (LAN). But the file sizes being produced are getting too big, so ours is more like a streaming technology, rather than compression technology. Our technology is fundamentally different. When a radiologist uses it, it’s almost surreal at first, because it is so quick."

"A key differentiator of our offering compared to others, is that because it is GPU-based, we are able to run our algorithm on our client’s existing hardware which takes around a second to provide the analysis, so it is pretty much on demand. This is unlike others that either require a fair amount of additional onsite hardware to run their algorithm or they have to do it in the cloud which means they need to take the data, anonymize it, upload it to the cloud, run the AI algorithm over it, send the results back, reinstate the patient’s data, and then reinsert it back into the client’s system. This can be costly and because the files are so large, time consuming."

"We think the first and most fundamental difference is that we’ve always taken the approach that we don’t move the image, rather we stream the pixels. This is fundamentally different from our competitors, a lot of whom are using the word streaming loosely in their marketing literature but fundamentally they still compress and send the image. A second key difference is that most of our competitors start off in the 2D space and so when it comes to 3D advanced visualization, they have to integrate or ‘skin’ third-party products. This means you’re not getting one product, you’re getting an amalgamation of a whole lot of products, which has a lot of overheads in terms of management and updating. So we think we still have a unique position in the market being the only company that can seamless do 2D and 3D in the one viewer.”

The company offers a leading suite of RIS (Radiology Information System), PACS and e-health solutions constituting one of the most comprehensive end-to-end offerings in radiology to hospitals, imaging centers and healthcare groups worldwide. Seven out of the top 20 hospitals in America uses its technology, including Mayo Clinic, Yale New Haven Hospital, Partners Healthcare and Northwestern Memorial Hospital, New York's Langone Health. Despite having penetrated the biggest hospitals in the US, the company still has only about 4% market share, leaving it with a long growth runway.  And there is plenty of room in disrupting the legacy players that include GE Healthcare, Siemens and Philips, who still make up about 65% of the market.

The company adopts a “pay per view” business model with the majority of its customers, which is based on committed minimum transaction numbers over a 5-7 year contract period, building a high quality scalable annuity revenue stream. Thus, this not only enables customers to more accurately align their investment in the software to the size of their business, but has the added benefit of creating significant ongoing revenue streams for the company with upsides as client examination volumes grow. A key differentiator of the company's software offering is the fast-track methodology to complete large-scale projects in under 1/4 the time of industry norm, delivering huge savings for the client, frees up the company's staff for other jobs, and reduces barrier to change.

Big future growth opportunities will come from its expansion beyond the realm of radiology into the "other ologies", as CEO Dr. H likes to call them, and its investments into artificial intelligence. Fields such as cardiology and ophthalmology also involve a large amount of imaging, but the business has only just started pushing into these areas. Its Enterprise Imaging single viewer enables the viewing of DICOM (radiology and cardiology) and non-DICOM images such as photos and HD videos (medical multimedia objects) all in one viewer. Examples of this include wound care photos taken at the bedside, ophthalmology images, dermatological images, as well as video (endoscopic, arthroscopic, operating room HD-video).

The U.S. government, as part of its Meaningful Use Program, has mandated U.S. health institutions to implement an enterprise-wide Electronic Health Record (EHR). Under this new model, all patient clinical data including images is entered into, and is accessed via, the EHR. This has resulted in heightened focus on enterprise imaging as medical images both DICOM as well as non-DICOM now comprise a large and rapidly growing part of the medical record. The company's software platform has the ability to display all of these image types within one product.

The company has also developed an open API which has the ability to interface with a broad range of its own and third-party AI algorithms. It has created its own AI algorithm for breast density developed in collaboration with the renown breast imaging team at Yale, and, along with the deal with Langone Health, it committed to a multi-year research collaboration to design and develop new imaging products, which included the integration of AI into these products.

The trend towards interoperable, modular, best-in-breed solutions is benefiting the company, whereby multiple components from different vendors are integrated into a single solution. Unlike systems from traditional PACS vendors, the company’s highly-modular and scalable design is ideally suited to this new paradigm resulting in a growing pipeline of opportunities that the company is actively pursuing.

CEO Dr. H shared: “Radiologists have told us they don’t want separate systems when it comes to AI, so we developed an open API that allows our customers to choose the algorithms that best suit their needs all fully integrated into our Enterprise Imaging Platform. We are excited to be working closely with the American College of Radiology (ACR) Data Science Institute to integrate our software and semantic annotations with the ACR AI-LAB, an initiative that offers radiologists tools designed to help them learn the basics of AI and participate directly in the creation, validation and use of healthcare AI.”

CEO Dr. H, who founded the company in 1983 with fellow tech expert and wine buddy Mr. H, summed up: "There's a lot more image processing, a lot more looking at the body in different angles rather than just one, and clearly you can reconstruct in 3D. We don't know of anyone at this point that has been able to match the functionality or the speed or the scalability of what we do. Photos and videos are becoming a much larger part of the medical record and it's not just in radiology and cardiology, it's across every discipline. Hospitals don't want six or seven different imaging products, they want one. Radiology is still the biggest user of images and it's the hardest nut to crack, but we think there's a broader market and our software is ideally suited to it. We're a little unusual for an IT company because we make money, pay dividends and don't have any debt. We're the 37-year overnight success story."