Global stocks are on track for their first monthly drop since March on the lack of another U.S. fiscal stimulus package and an increase in global virus cases that has raised the specter of more lockdowns. "Fiscal Cliff + Peak Fed = Second Leg of Correction" has been the prevailing market chatter. “FinCEN leaks” early in the week, revealing some of the world’s biggest banks such as HSBC and JPMorgan had continued to facilitate US$2 trillion worth of money laundering despite being aware of suspicious activities, had resulted in banking stocks to tumble over the week and the Stoxx Europe 600 Banks index crash to an all-time low. Aussie banks are also bracing for tsunami of defaults as support measures are withdrawn as a giant fiscal “taper” begins at the end of this month, with the downsizing of the JobKeeper program and the phased withdrawal of other support measures. “I cannot save every business, I cannot save every job,” British chancellor Rishi Sunak told parliament during the week as he scaled back job support and announced his Winter Economy Plan.

Fading hopes of further fiscal stimulus before U.S. election, as well as tighter travel and social distancing restrictions in Europe, added weight to the clobbering in markets and Cyclicals. U.S. equity funds and ETFs reported US$26.87 billion of outflows, the largest weekly outflow since December 2018 and the third largest outflow ever, more than reversing a US$22.67 billion inflow one week earlier; this was also the biggest weekly swing in fund flows in history. investors also dumped the largest tech ETF at the fastest pace in 20 years, with Invesco QQQ suffering its biggest daily outflow since October 2000. NASDAQ 100 non-commercial futures positioning is also now the shortest since 2008, sending sentiment to the second most bearish on record.

The largest high-yield junk bond ETF also saw the biggest single-day outflow since 25 Feb in the lead up to the pandemic selloff. The February comparison is ominous, because that month brought a string of withdrawals that preceded a steep pandemic-related selloff in risky markets. That selloff prompted U.S. lawmakers and Federal Reserve officials to introduce aggressive stimulus efforts, including a program for the Fed to buy corporate bonds and corporate-bond ETFs. Another worry has been how little creditors have been recovering on defaulted debt amid a deluge of new bankruptcies in 2020. The recovery rate on defaulted U.S. high-yield bonds and loans over the last 12 months is about 17 cents on the dollar, a record low and down from a 20-year annual average of 65.6%. Gold fell to a two-month low as the dollar extended gains. Silver plunged after entering a bear market. 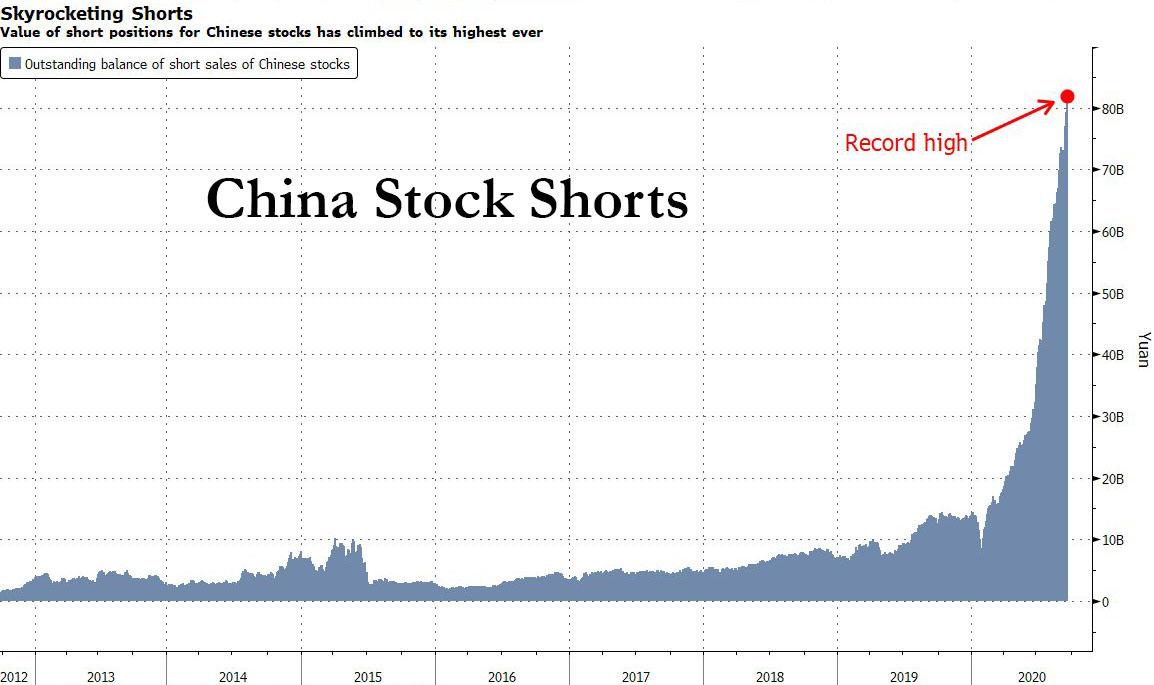 On Friday, trading in onshore bonds of China Evergrande, China's second largest and the world’s most indebted property developer, was halted after reports it was seeking government help to stave off a cash crunch caused the price of its shares and debt to tumble, and sparking a crisis of confidence among creditors who’ve lent the world’s most indebted developer more than US$120 billion. As Bloomberg reports, long-simmering doubts about the property giant’s financial health exploded to the fore on Thursday, following reports it had sent a letter to Chinese officials warning of a potential cash crunch that could pose systemic risks. The news sparked a furious liquidation in the company's bonds that continued into Friday, sending the price of Evergrande’s yuan note due 2023 down as much as 28% to a record low. Losses in the company’s dollar bonds spread to high-yield debt across Asia. The selloff was so intense that according to the Financial Time, it forced the Shanghai stock exchange to suspend trading in Evergrande bonds for half an hour on Friday morning, due to "abnormal fluctuations".

Can and will the Chinese government continue to bail out these too-big-to-fail indebted giants that have already included HNA Group, Anbang and Tomorrow Group, or will the day of reckoning come rudely knocking to stun and awake the ever optimistic investors latching on to the Great China Dream with its fragile financial foundation? In addition, Tianjin-based Bohai Securities defaulted after buying 375 million yuan (US$55 million) of special purpose bonds issued by the Henan government via auction who responded by blacklisting the brokerage firm which is controlled by the municipality of Tianjin. The rare default of a state-controlled financial institution on a local government bond purchase is the latest in a series that underscore the rapidly worsening financial situation in Tianjin, one of the four mainland cities that are under direct supervision of the central government, and one of the most indebted governments in China.