Macroeconomic Commentary
U.S. markets experienced its largest weekly decline since 30 Oct 2020, the week before the presidential elections, after the euphoria over Biden’s $1.9 trillion fiscal stimulus plan that was unveiled on Thursday fizzled with growing doubts on how much of the package will realistically and ultimately get passed by Congress, and over the price tag and ills that they unleashed, such as the tax hikes necessary to fund the profligacy.

In Biden's US$1.9 trillion relief plan, more than 150 million Americans would likely be eligible for a US$1,400 direct payment, on top of the US$600 payments approved in December 2020. Since the government sent people US$600 earlier this month, penny share volume and companies with shaky finances rocketed. A company that sounds like a word Elon Musk tweeted rose 1,100%. Tesla added US$130 billion, IPOs doubled and options trading exploded. Notably, speculative trades in penny stocks that trade at less than $1 and the riskiest stocks have soared and accounted for the staggering volume of around a fifth of the entire overall volume in the market, as trading volume on opaque broker-operated venues via apps like Robinhood exceed those on public exchanges like NYSE and Nasdaq for the first time since at least 2008. The additional US$1,400 check is likely to lead to additional speculation in stocks, which could continue to inflate an already-existing bubble. 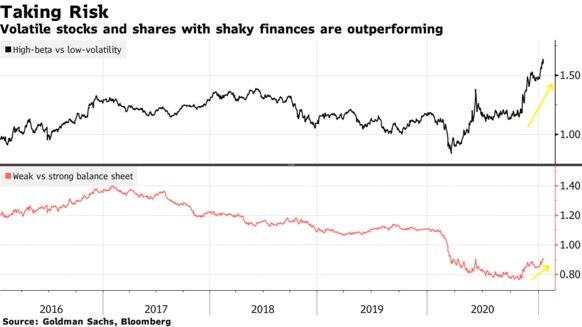 Following the Democrats win in securing a majority in the Senate after the Georgia run-offs, the “Blue Wave” effects in expectations for a largesse in fiscal stimulus handouts have resulted in a frenzied FOMO rotational shift towards the “reflationary trade” in the speculative assets and Cyclicals: Ten-year and 30-year government bond prices have plunged as yields soared, gold prices declined, technology stocks have struggled, while financials and banks soared, the prices of commodities used in infrastructure projects, such as copper, and shares in machinery manufacturers have advanced, and “green energy” stocks and companies focused on addressing climate change rocketed. Lower-rated U.S. state and local debt has rallied on the promise of extra federal support. Notably, since the end of August 2020, Facebook, Apple, Amazon, Netflix, Google, and Microsoft have dropped an average of 5%, even as the S&P 500 has gained 8%. An MSCI Inc. gauge of worldwide household product, packaged food and retail company stocks has slumped to a more than 12-year relative low against a broader global equity benchmark.

There were market chatters of a “taper tantrum” that the Fed would slow the pace of bond purchases, which happened in 2013 when yields surged on the disclosure the Fed was considering dialing back asset purchases, leading a jump in volatility in financial markets, though Powell rejected suggestions the Fed might start reducing its bond purchases in the near term, emphasizing that such talks are premature and that moderate levels of inflation would allow the Fed to keep rates low, having signaled last month that interest rates would stay near zero at least through 2023. The outlook is that the driver of rising bond yields matters more than levels, and markets seem likely to be adjusting to the new real rates regime of yield increase in which there is no change in the dovish monetary policy.

As euphoric traders piled into the trendy Cyclicals and Value Traps, we believe that there is a high probability of downside risk in chasing and catching them at exactly the wrong time after their sharp run-up from being blinded by the fiscal stimulus hopes and vaccine euphoria — the light at the end of the tunnel — and things can turn very nasty suddenly, as markets tend to underestimate how long that tunnel is, and how dangerous that tunnel is. This situation is very vulnerable for cyclicals to degenerate or revert back into its true ugly colors as cheap-gets-cheaper Value Traps once the vaccine euphoria fades or something negative happen on the mass vaccination roll-out or the vaccine does not prevent people from carrying and spreading the virus to others or new mutated virus strains erupt to render the vaccines ineffective.

Once the vaccines actually start being administered at scale and the pandemic recedes, a lot of investors are going to wake up to the fact that the global economy is still dogged by a host of thorny problems that both predate and have been exacerbated by the virus. The current unsustainable market euphoria over Cyclicals, Value Traps, Zombies (companies who cannot cover their interest expense with cash from operations) and Vampires (junk-rated corporations with negative EBITDA) has created opportunities for long-term investors in the inexorable rise of a selected group of fundamentals-based structural growth innovators who have remained resiliently positive throughout the most extreme ever market rotational change since November 2020, setting the roadmap this year and beyond in a post-pandemic future. These winners solve high-value real-world problems to generate visible and vigorous quality earnings growth before and during the pandemic, as well as are poised to enjoy continued healthy demand and staying power in a post-pandemic future when the world recovers painfully and slowly to transition from the Pandemic Health Crisis to the next crisis – the PTSD Post-Pandemic Growth Crisis.

The K-shaped recovery divergence, coupled with the worsening U.S.-China relationship, points towards the new world order in the post-pandemic future that marks the ascent of the quiet Nordic powerhouse region – comprising of Sweden, Denmark, Norway, Finland and Iceland with a combined GDP of over US$1.6 trillion, combined population of around 27.3 million people, and the highest regional GDP per capita in the world at over US$62,000 – where they are a Winter War kind of country: innovation happens when things are tough, not when they’re easy and comfortable.

We will continue to avoid the overcrowded and popular frenzy-gripped frothy emerging markets, such as China, Korea and India, that are driven and dominated by retail traders, as they are far more vulnerable to destabilizing selloffs, systematic corporate misgovernance and accounting fraud blow-ups and black swan risks. The Nordics has the lowest macroeconomic and corporate governance risk as a region and also the strongest in terms of resiliency in coping with the vaccine rollout transition and rebounding well in a PTSD Growth Crisis situation, far ahead of any country/region. Most importantly, the Nordic is less vulnerable to destabilizing fund flow sell-off, and market microstructure wise, the investor shareholding base in the Nordic companies is largely longer-term institutional investors and pension funds, unlike the volatile short-term speculative retail-driven trader flow in many other countries, including the U.S. where the longer-term forex risk has increased. Also, the Nordic is quite distinct from the Eurozone (EU) where fiscal and monetary coordination/disunity are always a problem, so it's regarded as an oasis on its own even though it is technically in Europe but is not part of the EU's problems.

Our portfolio companies have shown resilience and scalability during this tumultuous environment and the management continue to make key strategy decision to expand their market leadership in their respective fields. The quiet HE.R.O. innovators have invested wisely in innovations that sharpen their exponential competitive edge for long-term value creation, strengthened their market position in the value chain that supercharged their cashflow dynamics, developed new channels, new markets and new customer base for revenue growth while improving their profitability at a time when most businesses are struggling, and nurtured their human capital and corporate culture to foster innovation and ESG sustainability.

While the short-term day-to-day price movement can be volatile, what continues to be crystal clear is that the quiet structural growth H.E.R.O. innovators remain the most visible and vibrant pathway in a foggy, volatile, whipsawing, uncertain market to deliver sustained outperformance with their healthy fundamentals results.

Interesting Readings to be a Better Investor & Person
Translating Meaning Into Life: A Taoist Parable
Alan Briskin, from huffingtonpost.com, Dec 29, 2020

Do you have the patience to wait until your mud settles and the water is clear? - Lao Tzu

During a time of great drought, a Taoist master was asked by members of a village if he could help bring rain to their dry fields. They confessed trying many other approaches before reaching out to him, but with no success.

The master agreed to come and asked for a small hut with a garden that he could tend. For three days, he tended the garden, performing no special rituals or asking anything further from the villagers. On the fourth day, rain began to fall on the parched earth. When asked how he had achieved such a miracle, the master answered that he was not responsible for the rain. However, he explained, when he came to the village, he had sensed disharmony within himself. Each day, as he tended the garden, he returned a little more to himself. When he returned to balance, the rain came naturally.

I have heard that this was one of psychologist Carl Jung’s favorite stories, told to him by Richard Wilhelm, translator of the Chinese divination text, I Ching: Book of Changes. Jung believed Taoist beliefs mirrored his own understanding that what we call personal consciousness is only a partial perception of a greater whole. There are ways to fling open the mind, connecting us with a collective unconscious, allowing us access to larger universal rhythms. And from this fruitful entanglement, parallel events can arise, such as what happened between the Taoist master and the rain falling.

Jung would later call these seeming coincidences synchronicity, a psychological principle that treats the inner attitude of the person as inseparable from events taking place in the world. Jung, however, was not suggesting or equating synchronicity with causality. The Taoist master did not cause the rain to fall. Rather, Jung believed there were parallel processes in which outer events mirrored psychic activity. He was struck by Wilhelm’s insight that tao, normally translated as the way or path, might be better understood as meaning. Synchronicity could be understood as coincidences threaded together by meaning, a way of knowing that was potentially as impactful as Western concepts of causality.

We all have some intuition of a thin veil separating us from a larger universal consciousness. Jung was not alone in believing this veil could be lifted. Philosopher and novelist Colin Wilson wrote of a “subconscious mind” that becomes numb, “like an arm upon which I have been lying in my sleep, and which has become completely dead and feelingless.” The task is to restore circulation between the subconscious mind and the flow of life. In doing so, we awaken a feeling connection with awe and mystery. And in awakening to this possibility, a fundamental transformation takes place. No longer passive subjects at the mercy of events, we become active participants translating meaning into life.

Does the parable of the Taoist master represent a symbol of the awakened mind, a person who has restored circulation between himself and the Universe? And if this is the case, then we must consider anew the synchronistic attitude toward life. When we restore balance and meaning in ourselves, we seed the world around us with hope and purpose.